In this post I’d like to share some photos and info about the birding potential that this area has. Manuel Antonio is an excellent national park for the  traveler seeking for a general nature experience, monkeys are fairly common, sloths, deers, frogs and many others that despite the crowd that shows up they are not afraid and rather can offer nice sightings. Naturally its crowded during the busy seasons (Christmas, new years, spring break etc) but visit this park in the morning (7:00am) should be enough to avoid most of the crowd).

In the other hand it is not a good birding spot and only a few-yet interesting species can be expecting such as brown boobies, black bellied and river side wrens, black hooded antshrikes, frigatebirds, some herons, gray necked woodrail as well as the long billed gnatwren and few others, but still, you wont get that much and the morning could end with about 20ish or so species.

One of the beaches during the low season, just beautiful!

A close encounter with a young white faced-capuchin monkey

Squirrel monkeys are very uncommon but often times the afternoon is when you have better chances at the park, bee on the look out since gray headed tanager, double tooth kite, slaty tailed trogon and a few woodcreepers follow this type monkey so they can eat the bugs that are flushed away by the monkeys.

But this is what happens if you try to enter this park at 11:00 on December the 25th!

But this is what the park looks like early in the am and during the “wet” season. 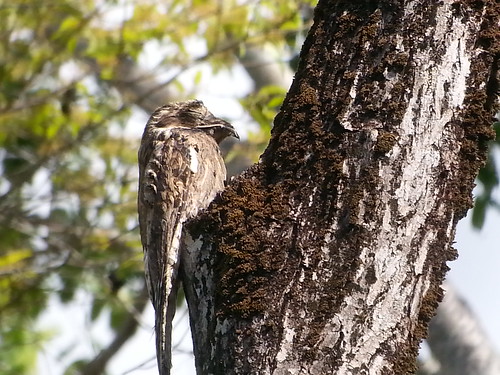 Depending on the season chances of seeing a common potoo are good, ask local guides for it during early rainy season

Orage billed sparrow in one colorful bird in the Arremon group, commonly seen at the sloth trail.

If you still want to come to MA and bird the park I suggest you to take the look out point trail (sendero Mirador), right at the bifurcation  of the Mirador and Gemelas beach trails is a good spot for great tinamou, as you walk towards the look out look for striped-throated hermit, red capped manakin and ochre bellied flycatcher. The punta catedral trail is the one that takes you to the end of the small peninsula (cathedral), it takes you “closest” to the islands so chances of seeing brown bobbies are good, notheless if you do not have a spotting scope views can be limited, as going up look for blue throated goldentail, little and great tinamoues.

The area around Manuel Antonio offers a much better birding opportunity, these are Esquipulas, La gallega river and El rey.  And of course! your hotel garden!

Esquipulas is basically a small country town 45 minutes to the east of Quepos, located just at the foothills of the mountains of Nara mountains, the public road that leads to the Town is the birding spot, the varied landscape includes cattle fields, home gardens, secondary rain forest, orchards, creeks and the primary rain forest in the back! So it offers sightings variating from house wrens to Baird’s trogons, from rufous tailed hummingbirds to King vultures, simply a great spot. 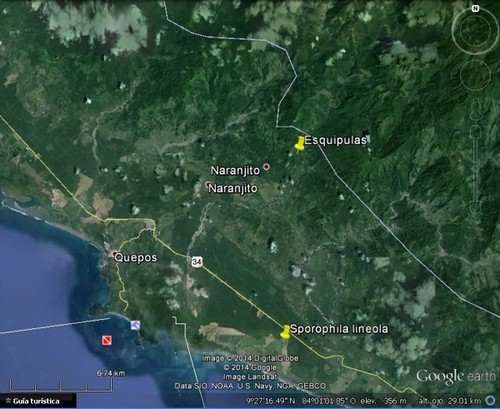 Esquipulas Location, right at the foothills of the central pacific mountains, the Naranjo and La gallega rivers run down this mountains creating a small low pass which presumably helps middle elevation species to migrate to the lowlands during the attitudinal migration.

The access to Esquipulas requires a 4WD car or at least a car with good ground clearance and sometimes during the summer it can be done in a 2WD sedan. 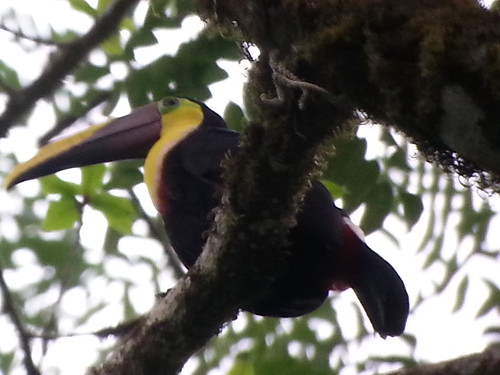 Close to Esquipulas is La Gallega river, this is located near the town of Naranjito, 8 km north east of Quepos, within 30 minutes  drive.

This river is home to some particular species of interest, such as red breasted blackbird, Southern lapwing, tropical mockingbird, collared plover and ferruginous pygmy-owl.

Naturally other species such as mangrove swallow, southern and northern rough winged swallows, king fishers and others call this place home. If you do come to this river in search for this species make sure to wear long sleeves and hat, you will be in the open, if you have enough time then explore the grass in the other side of the river in search for pale breasted spinetail.

El rey is located 16km south of Quepos, near the “Finca” Maritima, in the western side of the palm oil plantation.
This place consists of temporary rice fields with some canals that feed the rice paddies, these canals flood the area and during the rainy season, water remains between June to Mid February, it makes it an strategical stop for NA migrants such as mangrove Cuckoo, various warblers, swallows, scissor tailed Flycatcher and various FC spp. American pygmy kingfisher, gray necked wood rail, purple gallinules, green brested mango and other interesting species are common targets here. 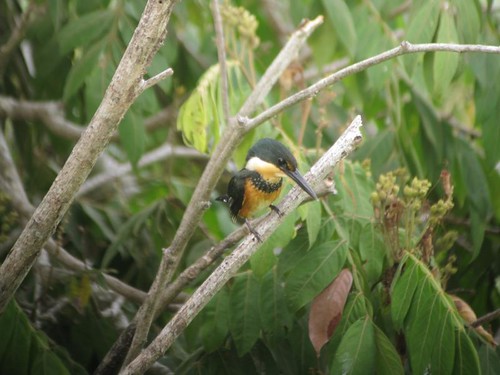 One of the top wanted at el rey; American pygmy kingfisher

This little evil-eyed bronzed cowbird is abundant at El rey

Seeing mangrove cuckoo is not an every day opportunity but chances are good during migration. 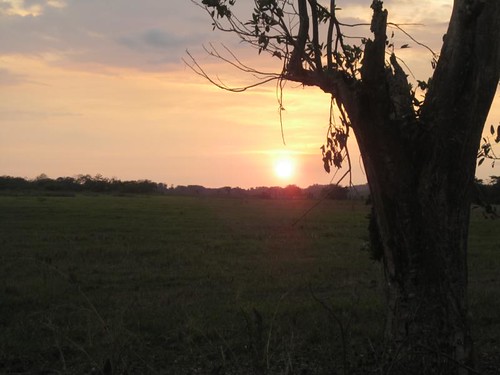 Interestingly El rey is surrounded by a massive palm oil plantations, which is one of the main products of the area, the marshes, grasslands, mangroves close by and canals that feeds the area are important factors that make El rey a true oasis for many migrant species to stop and feed in order to continue their journey home. During 2013 2 bird species were added to CR list and were spotted here; Clay colored sparrow and lined seedeater. 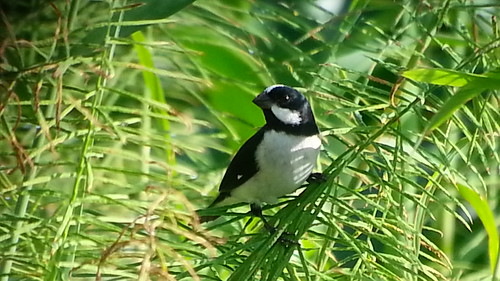 Lined seedeater, a south american vagrant was seen at El Rey for 5 days in a row.

Manuel Antonio near by birding spots.
If you do not have a car or do not have the time to take one day to explore/tour the mentioned sites before there are some spots that are worth to try:

The road down to La mansion and Parador hotel.
If you find your self in this area take time to walk a long this road, species to expect are cocoa and streak headed Woodcreepers, palm, cherri’s, blue gray and golden hooded tanagers, red legged honeycreeper and green Honeycreeper are often seen right by the entrance of Arenas del Mar. Also black mandibled Toucan had been reported nesting here in 2 years in a row now. In the afternoon (3:00-5:00pm) chances to spot the squirrel monkeys are high, be in the look out for double tooth kite, gray headed tanager, northern barred woodcreeper and slaty tailed trogon who are known to accompany these monkeys in search for food.

The road down to playitas:

Once you reach the entrance to Arenas del mar, 30 meters before on the left hand side there is a gravel road, it leads to the playitas beach. Birding here can be basic but can offer possibilities to spot chestnut backed antbird, black hooded antshrike, yellow headed caracara as well as fiery billed aracaries in the morning. Try luck on king vulture and laughing falcon here.

The southern end of the public beach leads to the exit of MA park. There is a small mangrove estuary, look for gray necked wood-rail near the roots of red mangrove trees, some times yellow crowned night heron roost by the end of the beach.

Green heron, little blue heron and white ibis are common.
Protonothary warbler, northern Waterthrush are possible during CR summer, and try luck on the endemic mangrove hummingbird which feeds on the flowers of pineapple mangrove trees.

Of course if you have a spotting scope available make sure to look on the near by islands, brown boobies and magnificent frigatebirds are abundant, but occasionally elegant tern can be spotted. Not much in the islands besides that.